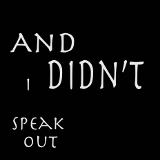 Well.  You know the poem.

I learned this poem at St. Olaf, a college of the Evangelical Lutheran Church.  Harold Ditmanson, a professor held in such regard that the college named a wing of the library for him, stated that Lutherans had to “confess a special guilt” for the Holocaust.  Art professor Reidar Dittmann spent WWII in Buchenwald.   Both professors had retired by the time I got to Olaf, but they had shaped the institution.  So, St. Olaf discussed  the antisemitic undertones in some of the architectural details around campus quite frankly.  We discussed in great detail the nature of and use of art and propaganda in Germany in the 1930’s.    We discussed how a modern and liberal state like Germany could fall so far, so fast.

And of course, we read the poem, written by a Lutheran pastor.

The haunting thing about the poem is the order of precedence.  Despite a long history of antisemitism in Europe it is no mistake the poem starts with socialists and trade unionists.  Both groups had highly visible operators who were calling for the violent overthrow of the current order.  Both groups planted bombs and sabotaged factories.  They were easy to blame.  It was easy to remain silent when the government took them away.  Were I in Germany at that time I’m not sure I would have spoken up.  My silence would have contributed to building the myth that the world was so dangerous we need the government to protect us.  Then, when the government told me of other groups that would threaten my family, well the government was right before, maybe they are right again.  At some point there would be no one left to speak for me when my time came.

That was then.  This is now.  Now we know how this works.  We know that a government can gain power over a population by demonizing those who are already marginalized.  Then the government can move on to the next group, always keeping us in fear of a new threat.  Start small, and eventually there will be no one left to speak.

Last night, President Trump devoted eight paragraphs of his speech specifically to the victims of violent crime perpetuated by illegal immigrants.  He is directing the Department of Homeland Security to create an office specifically to help the victims of “immigration crime engagement.”  The word illegal did not make the jump; he is no longer talking just about illegal immigration.  He is telling us that crime perpetrated by immigrants is a threat to us all, and only the government can save us.

Immigrants to our country, both legal and illegal, are less likely to commit crime than those of us who were born here.  The administration already has the legal authority to deport illegal immigrants without the need for the immigrant to commit an additional crime.  If illegal immigrants commit fewer crimes than the general population, and if the government can deport them already, why create an office that highlights crime committed by immigrants?

Well, you know the poem.

One thought on “First they came…”