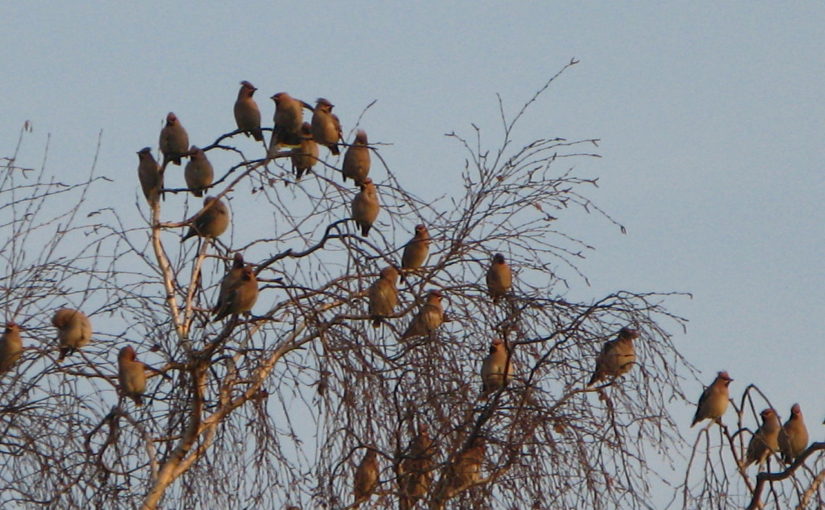 As far as urban areas go, you won’t find many cities as integrated into nature as this one.  We have a fantastic trail system, we have moose and wolves that live within our city boundaries, we have beluga that swim off our shores, but the nature of downtown is still not natural.  The biggest park downtown used to be an airfield, and it still kind of feels that way, confined as it is in a long narrow strip with a few decorative trees planted here or there.  Nature is on the other side of Muldoon.

There are times, however.  Times when the weather is turning, and even downtown feels exposed and somewhat raw.  The shifting barometer makes changes the sound of downtown as birds seek shelter in the somewhat warmer city core.  That same park which generally feels like a pleasant facsimile of nature becomes something awesome.

I was taking my lunchtime walk with the air screaming from the sound of Bohemian Waxwings.  There were so many in the trees around the power substation that they looked like leaves, perched on the branches rather than suspended from them.  As one they took to flight and they filled the air with a murmuration that flew back and forth the length of the park strip, pulling close enough that I could feel the disturbance in the wind as they flew by.  It was thrilling, almost electrifying.

When we think of a city that lives with nature, we tend to think of the big things.  We think of the challenges associated with keeping power running during a storm.  We think of the Facebook communities dedicated to warning dog walkers where the bears are.  We think of the danger posed by moose who wander down the middle of the Glenn Highway, or our jogging trails.  Every once in awhile, it is worth remembering that the awesomeness of nature can also be found in a flock of 2 oz. birds.